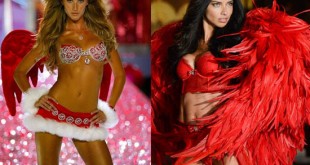 Candice Swanepoel $5 million/£3.2 million Age: 27 Hometown: Mooi River, South Africa Angel since: 2010 Discovered: Scouted in a local flea market when she was 15. This South African model became an Angel in 2010. She has been the cover model for eight different Vogue magazines and was featured in the 2010 Victorias Secret, SWIM, catalogue, among others